Growing connections with a valuable audience

Teenagers are a hard audience to reach, discerning about the content they choose and resistant to being told what to do. So our approach for Channel 4 was based on learning through discovery, on not telling but inspiring teens.

We spent serious amounts of time with teenagers and their teachers, getting to know them and the issues they face. We used what we learnt to inform the advice and situations in the storylines of the interactive content we created.

SuperMe is a multi-discipline experience to support teenagers through some difficult years by helping them to build levels of resilience and strength. We empowered the teens through interaction with online games and three series’ of videos that built into one powerful story.

Insight and understanding is vital to growing any audience but especially so with teens. Putting this into practice proved to be very rewarding for Channel 4.

Our Skins work included the creation of the world’s first social media ‘catchup’. As part of this we created the ‘spoiler filter’, which teens used to make sure they were just viewing additional stories relating to the episodes that they had already viewed.

We’re very happy with the results we achieved over series 5 and 6:

The fans loved it.

Nightmare High is a story about the worst day of school ever. So bad that reality itself gets broken. It’s your job to fix it, and get home in time for tea. It’s a story told in games, video, graphics, text and other elements, all knitted together in a beautiful way. It has a purpose behind the fun, too — to teach 10-12-year-olds the control they have over their own lives at a time of great transition.

How We Made Nightmare High

Nightmare high is a new kind of game for Channel 4.

There’s always plenty of digital chatter about development of new formats for a new media landscape and the progress of 360 commissioning—but few people who engage in that conversation have the opportunity to work on ambitious projects that move beyond the limitations of brand-owners’ vision and some broadcasters’ risk-averse behaviour. The vision of the commissioning team over at Channel 4 coupled with the company-wide support of Somethin’ Else has allowed me to launch some wonderful products over the last three years, but Nightmare High builds on all of those to be the one I’m most proud of.

Working across brilliantly cutting-edge projects like Routes, SuperMe and E4’s Misfits I was able to gain invaluable experience which all helped to make Nightmare High a cohesive multimedia game which is fun to play but most importantly one that strikes the balance between education and entertainment in a way that resonates with tweens. An 11-year-old can’t play this game without laughing out loud but they also can’t fail to miss the core learning: big changes are exciting and scary, and there are things you can do to make them easier and to develop into a more resilient young person.

Nightmare High is a story-based web game. You, the player, just joined a new school and on your first day everything has gone terribly, horribly wrong. You’ve got no mates, you screw up in class, you sit in the wrong seat and by lunchtime even your sister is blanking you. Worse still, your pathetic meltdown in Expressive Arts ends up on YouTube.  At the end of your first day you find yourself sucked into a comic-book unreality where everything is upside-down and back-to-front. Reality has imploded and it’s your fault.

And so you enter a fantasy school full of zombie teachers, skyrockets and a terrifying darkness that creeps ever closer to your classroom. The only safe place is the infamous Secret Toilet: where there is a never-ending supply of bogroll and you don’t have to fear somebody peeping over the top of the cubicle. Your job is to fix up reality with the help of your sidekick, D’Mentor, and get home in time for tea. As you explore the school you stumble across various celebrities: in the basement, in the bike sheds and cooking up jam lasagna in the canteen; as they share memories of their school days your score improves, your friendships improve and you begin to understand more about how people really work underneath the labels (bully, popular, geek and so on) and how to make good friends.

The story is told with many different devices and media, and those were selected to work for the audience and story, and obviously with one eye on the budget. Dramatic video, minigames, applications which reflect the players real life skills, celebrity videos and comic strips all feature. It was a challenge to make an hour of fictional gameplay on the budget of a couple of TV programmes. After all, if this were a TV drama it would have cost millions, so our approach had to be adaptive. The system design incorporates collectibles which relate directly to the learning, known as your FIXT score — Friendship, Independence, X-Ray and Transformation. Those collectibles relate very directly to resilience learnings more commonly known to academics as support networks, personal agency, reflection and adaptability.

The drama was confined to the real world (a multi-location epilogue and prologue, and studio-based shorts which feature your friend D’Mentor). Without the option of an animated 3D interface to navigate the school we opted for a static clickable illustration for the main interface (quick to load, easy to use) which slowly fills up with content. We also used interactive comic strips to sew together pieces of narrative, which have already proved very popular among the young game testers.

What I’m most proud of is the seamless movement through multiple content types as players navigate through the thirteen episodes. Nothing feels forced, not the ‘type’ of content and certainly not the educational content. The learning is integrated into the scripts and the fabric of the interface. Your transition journey is part of your story as communicated by your in-game friends, and players are given the option to explore that as much or as little as they like.

As with SuperMe before it, the critical decisions that formed this project came from our work with schools in the project definition phase. Taking a story-based approach, choosing a fantastical and silly world and exposing the reasons why kids label each other so quickly were all inspired by the work that Tassos Stevens of Coney led with our six partner schools. By spending so much time focussed on our potential players we got the chance to talk to educators and experts working in the area of transition and it became clear that now more than ever teachers need this kind of resource, as transition-focussed support staff become harder to provide in-school. We were able to take initiatives that were being used in schools and write those into our game (for example, D’Mentor was inspired by the buddy system which many secondary schools use for incoming students). In addition we embedded core resilience strategies, like getting the players to write a letter back to themselves in order to accurately reflect on what they’d learned by playing. The great thing about this is that we’re also able to use that real advice for incoming players and make it part of the story.

So we really hope you enjoy the game, and that you play it to the end. We welcome and invite feedback — send it here. Finally, I’d like to thank a few people without whom the team wouldn’t have had the opportunity to make such a great piece of work: Alice Taylor, Matt Locke, Jo Twist & Gemma Brady at (or previously at) Channel Four, Poppy Nash at the University of York, Sam Hawkins at Bancrofts School, Paul Bennun at Somethin’ Else and all of our brilliant game testers. And of course hats off to a team who went the extra mile at every step. Thank you!

In November 2012, Nightmare High won the Children’s BAFTA for Best Use of Interactive – play it now at NightmareHigh.com. 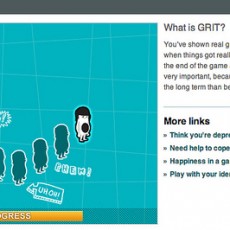 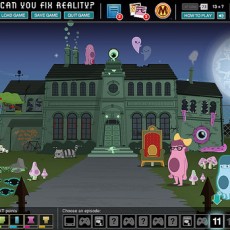 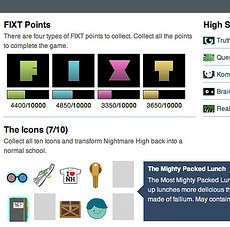 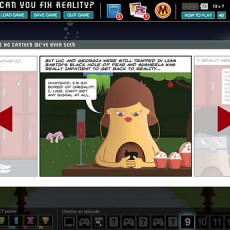